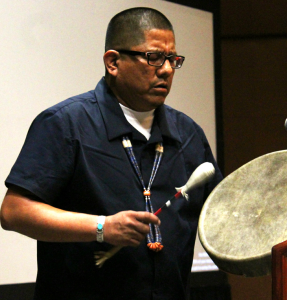 Tilford C. Brown is Dine (Navajo) from Gallup, New Mexico. He lives and works as a Human Resources Specialist at the Veterans Medical Center in Albuquerque, New Mexico. He helps veterans with retirement, awards and their benefits. He also serves as the American Indian Special Emphasis Program Manager for the Center.

Tilford is a U.S. Marine veteran, having served in the U.S. Marine Corps from 1989 through 1993. He has a BA in Management, Organizational Behavior/Human Resources Management from the University of New Mexico.

Tilford first attended the SAIGE National Training Program in 2010 at the Mohegan Sun in Connecticut and became a member. He has assisted SAIGE since then as its official singer, opening up many sessions with song and prayer. In 2013 Tilford composed a song especially for SAIGE. Tilford is a Lifetime member of SAIGE and active member of the SAIGE Warrior Society.

Tilford serves on the board to “help SAIGE continue the admiration, beauty and harmony it has built. SAIGE cares about the preservation of native cultures, languages and traditions that our elders and spiritual leaders speak of, along with investing into our youth and veterans.” These are all things that Tilford believes in and wants to be a part of.