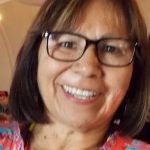 I am Sue Morris, Comanche Nation enrollee originally from SW Oklahoma. I am a lifetime member of SAIGE and have served on the SAIGE board since 2011. I am the current treasurer for the organization. I was appointed by the Chair to fill the treasurer position when the elected treasurer stepped away from SAIGE. The following election cycle I was elected.

I have also been honored to serve as Co-Chair for two National Training Programs as well as tribal liaison for other NTP’s. I am a member and former officer (treasurer and president) for the Oklahoma Federation of Indian Women. OFIW is the sponsor of the scholarship pageant for Miss Indian Oklahoma as well as several statewide awards for deserving Oklahoma American Indians and deserving community members supporting tribal people initiatives. I am a member of Comanche Indian Veterans Association (CIVA) auxiliary which assists with color guard support for various Indian and non-native groups throughout the SW, and the Walters Service Club, the founding organization for the Comanche Homecoming Powwow.

I also served two terms on the board of trustees for the Comanche Nation College. I am graduate of Cameron University and retired from the Corps of Engineers after 30 years. Before working for the Corps I worked for the Department of Army at Fort Sill, Oklahoma. In my spare time I am a gardener and a baker in addition to being an avid reader. I am a staunch fan of the Oklahoma Sooners and am a season ticket holder for over 25 years.