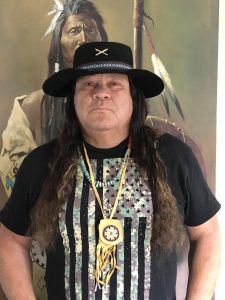 In 2016 I received the Achievement Award from SAIGE for saving a coworkers life with CPR and stopping an aircraft from taking off that would have crashed upon landing.

I am Chirichua Nde. My ancestry comes from the mountain strong hold of Chihuahua Mexico where the Chirichua fought and hid for many years. I am a retired 20 year Vet who served both in the Marine Corps and Army.
I served in Desert Storm and have been sent to two classified missions, I have been awarded thirty Medals.

I presently have a band called Blue Mountain Tribe who are all Native Americans and we are popular all over the world. We were honored to perform at two SAIGE events. Blue Mountain Tribe’s goal is to stop the suicide of our youth on Reservations.

I am serving on the board because I know the struggles of the American Indian especially in today’s society. I feel I can bring strength and encouragement to our people. I want to encourage all SAIGE to search where they work for Native Americans and tell them about joining SAIGE, I want to bring up our numbers. I am also serving on the board because I have a special gift of love and compassion and I want to bring that to all SAIGE members.