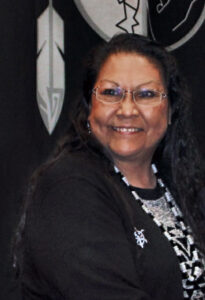 Roberta J. Lewis grew up in Anadarko, Oklahoma and is an enrolled member of the Kiowa Tribe of Oklahoma, she is also of Wichita and Pawnee descent. Ms. Lewis has strong ties to her tribal culture and participates in several tribal events throughout the year.

Ms. Lewis has organized and prepared Indian Taco lunches to raise funds for the District Office’s contribution to the Combined Federal Campaign (CFC). Ms. Lewis is active in mentoring young American Indians by sharing her food and craft skills. She invests in young native girls by assisting and supporting their basketball and softball teams. She has also taught young ladies to fringe dance shawls and beading for cultural celebrations. In 2016 and 2017 she brought her skills and talents to teach beading and fringing to attendees at the SAIGE National Training Program. Both years the class was at maximum attendance and enjoyed by the participants.