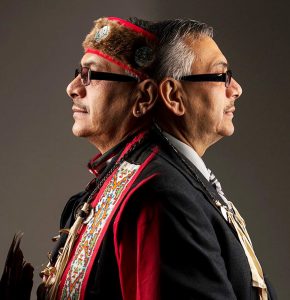 My Anishinaabe (Indian) name is Guyaushk (Seagull), am a member of the Red Cliff Band of Lake Superior Chippewa Indians of Wisconsin, from the Eagle Clan, have two sons, eight grandchildren, and two great granddaughters, with another one due in January 2020.

I served on the Red Cliff Tribal Council, in 1982-1984, and from July 2010 to November 2011. In addition to serving as a Council member, I also served as the Vice-Chairperson and Tribal Treasurer.

While I’ve been following the Traditions and Culture of the Anishinaabe (Ojibwe/Chippewa) all my life, it wasn’t until I started on my journey into sobriety on November 6, 1992, where I was able to fully appreciate and understand the strength of our Traditions.

I “retired” in July 2018, however, was recruited to serve as the Director of the Red Cliff Outreach Site with the Lac Courte Oreilles Ojibwe College.
My Doctoral Project, entitled “NATIVE AMERICAN/INDIAN TRIBAL ORGANIZATION AND LEADERSHIP: UNDERSTANDING THE PAST, LIVING IN THE PRESENT, DESIGNING THE FUTURE FOR TRIBAL ORGANIZATIONS AND LEADERSHIP,” concentrates on the encouragement of integration of traditional beliefs and philosophies into the Tribal Organization.

Another part of my journey, was working with the Bureau of Indian Affairs for 5 years and with the Indian Health Service for 6 years. During a time when there was an emphasis to reduce the Federal employees, I was selected for a “Buy-Out,” and utilized the incentive(s) to begin my own Tribal Management Consultant business, Guyaushk and Associates, in October 1995.

The services provided through Guyaushk and Associates related to organizational management issues. I believe in the encouragement at all levels to create an atmosphere of cooperation, collaboration, and once in a while…”COLORING OUTSIDE THE LINES.”

I became aware of SAIGE a few years ago, and have had the pleasure of being one of the Break-Out Session presenters, including the recently held Conference in Niagara Falls, in June 2019. I like to focus on a personal aspect, when working in an organization, like the Federal Government, and encourage the integration of Cultural beliefs, including a personal journey into Spirituality. I’ve learned the concept of starting with the well-being of self, and how it plays a major role in how we function in our personal and professional lives.

I believe my experience in following and a continuous effort in learning the Traditions and Cultural, combined with being an elected Tribal Official, working at the Tribal levels, working at the Federal level, and serving as a Tribal Management Consultant can be an asset.
Chi Mii-Gwech (A big Thank You) for being elected to the SAIGE Board. I consider it a true honor.