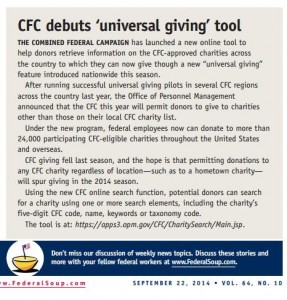 CFC debuts ‘universal giving’ tool
THE COMBINED FEDERAL CAMPAIGN has launched a new online tool to help donors retrieve information on the CFC-approved charities across the country to which they can now give though a new “universal giving” feature introduced nationwide this season.
After running successful universal giving pilots in several CFC regions across the country last year, the Office of Personnel Management announced that the CFC this year will permit donors to give to charities other than those on their local CFC charity list. Under the new program, federal employees now can donate to more than
24,000 participating CFC-eligible charities throughout the United States

CFC giving fell last season, and the hope is that permitting donations to any CFC charity regardless of location—such as to a hometown charity—will spur giving in the 2014 season.
Using the new CFC online search function, potential donors can search for a charity using one or more search elements, including the charity’s five-digit CFC code, name, keywords or taxonomy code.
The tool is at: https://apps3.opm.gov/CFC/CharitySearch/Main.jsp.
NOTE: SAIGE Code – #26052

You can follow any responses to this entry through the RSS feed. Both comments and pings are currently closed.