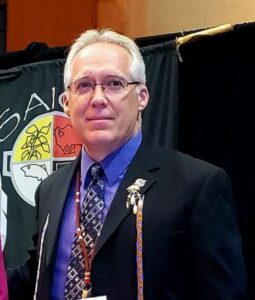 She:kon members of SAIGE. My name is Philip Hamel and I am asking for your vote as I seek re-election as the SAIGE Secretary. In July of 2019 I retired from the Federal Correctional Institution in Ray Brook, NY where I had worked since 1990, with the last 10 years as the Environmental and Safety Compliance Administrator. I have served as a board director or officer of SAIGE from 2008 – present and was the Ray Brook Native American Special Emphasis Program Manager (SEPM) from 1997 – 2016. Prior to retirement, I had been recognized by the Bureau of Prisons (BOP) with SEPM awards for four separate years. In 2016 I received a SAIGE Achievement Award for Leadership. These awards were for my education, outreach and commitment to American Indian and Alaska Native issues and dissemination of information regarding various American Indian issues both within the BOP and to outside organizations.

While at the BOP, I played a pivotal role in getting the Affirmative Employment Branch of the BOP to recognize the distinction and importance of American Indian and Alaska Native issues through my association with SAIGE, and to utilize the organization to train their SEPM’s on American Indian and Alaska Native issues starting in 2007. The BOP continues to embrace what SAIGE offers by sending their SEPM’s and Selective Placement Program Managers to our National Training Programs.

Additionally, I currently serve on the Board of the Northern Adirondack Safety and Health Council. I have a lovely wife of 32 years and two wonderful adult sons. It has been my privilege to be elected to the SAIGE board in the past and I would be honored and humbled to be re-elected to serve our members as Secretary, as we address the many issues related to American Indians and Alaska Natives.