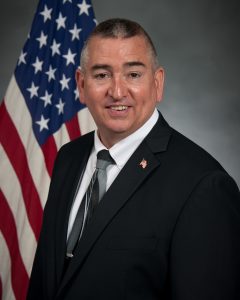 Rob is an enrolled citizen of the Echota Cherokee Tribe of Alabama. His ancestors include members of several tribes from the people of the Onödowa’ga (Tonawanda Band), Ani-Yun’ wiya, as well as the Anishinaabe (Nopeming Band). He is a lifetime member of the Society of American Indian Government Employees (SAIGE), currently serves as a Director on the SAIGE Board and is a member of the SAIGE Warrior Society.

Rob was born into a military family, with both of his parents being Veterans of the Air Force. He joined the Army when he was 17, and in 2010 he retired from the Army after serving for 28 years. He was six months old when he first went overseas with his family. When he retired he had 12 overseas assignments to his credit and over 36 months of combat time (Somalia, Afghanistan, & Iraq). His formal education includes degrees from the University of Florida and Nova Southeastern University. His service to Alabama’s native community includes appointments to the Alabama Indian Affairs Commission as well as to the Governors Indian Interstate Council. Nationally, he has served as a delegate to the National Congress of American Indians for two sessions, the Alabama Association of Higher Education diversity Officers, and the Auburn American Indian Association.

Rob’s final assignment with the Army was in Alabama, where he retired and now lives with his wife Susan, and two daughters, Kaitlin / Ohyayzohleyohmah (Quiet Waters) and Nicole / Nasgheagayyokahnohgiedie (Her Spirit Sings). He is a lifetime member of the National Native American Veterans Association, VFW, DAV, AMVETS, and the National Defense Transportation Association. He is a recipient of the Alabama Legislature Medal of Honor and the SAIGE Military Meritorious service Award.