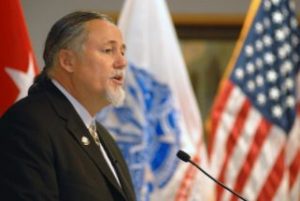 Waabijiizi Ma’iingan (He is a Grey Wolf)
Danny is Anishinabe and his ancestors include members of several tribes of the Lake Superior Chippewa. His great grandfather was Animodoskwan (Plenty Dogs), a LaPointe Chippewa of the Lac Courte Oreilles and Madeline Island region. He is a lifetime member of the Society of American Indian Government Employees (SAIGE) and currently serves as a Director on the SAIGE Board and as the Director of the SAIGE Warrior Society. Danny has served on the SAIGE board since 2007 to include two terms as the Chair from 2008 to 2012.

In 2007 he retired at the rank of Sergeant Major from the United States Army and Army National Guard with 30 years of active duty. His last duty assignment was as the Michigan Army National Guard Recruiting Command Sergeant Major. He is a Master Badge recruiter and Chief’s 50 awardee. SGM Garceau served three years as the Recruiting and Retention Area Command Sergeant Major Chair for Region IV representing the Great Lakes States. SGM Garceau served on the Michigan Diversity Council for seven years as the Strength Maintenance Advisor and as the Native American Special Emphasis Program Manager. His formal education includes the University of Phoenix, Vincennes University and Northern Michigan University. His military education included over a dozen schools and courses. He is a BNCOC Distinguished Graduate, ANCOC Honor Graduate and in 2002, graduated with honors from the United States Army Sergeant Major Academy, Fort Bliss, Texas.

Danny lives in the homeland of his ancestors on the southern shores of Lake Superior with his wife Diane and grandson Nish (Logan) /Misajiidamoo (Grey Squirrel). He is an active member of several organizations including; a Road Captain with the Patriot Guard Riders, President of the Ishpeming Alumni Association, Treasurer of the 107th Engineer Retired Officer Association, Lifetime Member of the Blackhorse Association /Blackhorse Cavalry Regiment Motorcycles, Lifetime Member of the AMVETS and DAV, the American Legion, Michigan Bikers Helping Veterans, and serves on the Honor Guard with the Wiikwedong Ogitchidaa Society for the Keweenaw Bay Indian Community. He also plays native flute and drums/sings with Morning Thunder Drum and Teal Lake Drum.