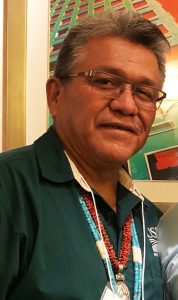 Carl Etsitty is Tódich’ii’nii and Tó’áhani of the Diné (Navajo) Nation. After an honorable discharge from the U.S. Navy, Carl graduated from the University of Arizona with bachelor’s and master’s degrees in Soil, Water and Environmental Sciences.

He worked for 10 years with the U.S. Environmental Protection Agency (EPA) as a microbiologist / risk assessor, where he assessed risks for new biological pesticide registrations, including genetically engineered organisms for human health and product chemistry reviews. He also helped to establish EPA’s Tribal Science Council, and within that context worked to affirm the validity of Tribal holistic science. In addition, he was an American Indian Special Emphasis program manager.

Carl moved on to USDA-Animal and Plant Health Inspection Service (APHIS) as a regional biotechnologist with Biotechnology Regulatory Services, then became Plant Protection and Quarantine’s Tribal Liaison. In his current position as Assistant Director of APHIS’ Office of National Tribal Liaison, he plays a multifaceted role: providing guidance in carrying out Tribal consultation, reviewing Tribal implications of new/modified regulations, reaching out to Tribes, training staff, building cooperative partnerships, and more. He is a lifetime SAIGE member, and assisted in the formation of SAIGE from the beginning. He continues to work with his local community on the reservation.